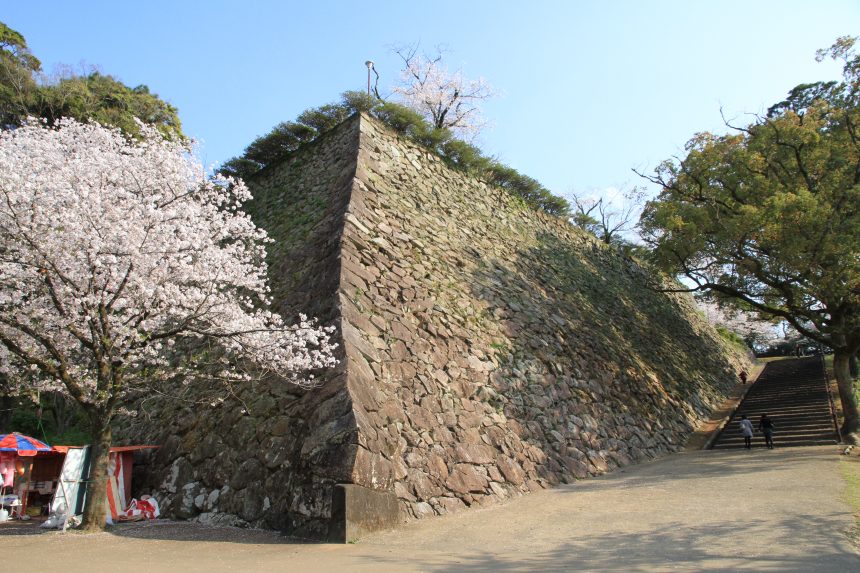 Shiroyama-jo Castle is a castle built on Shiroyama, which is located at the center of downtown Nobeoka. It is a Hirayama-jo type castle, built on a mountain located in the middle of a flat area. The castle was also known as Agata-jo, or Kamei-jo. It is the only one in the northern part of Miyazaki built after the Battle of Sekigahara, and the stone walls, the well, and the garden maintain their original appearance. The first lord of Nobeoka, Takahashi Mototane started to build the castle in 1601, and it was completed in 1603.

The castle consists of four buildings, Tenshudai, Honmaru, Ninomaru, Sannomaru, and Nishinomaru (the current Naito Kinenkan, the Naito Memorial Hall). The 22 meters high giant stone wall was built using the technique called Nozura-zumi and is known as “sennnin-goroshi (killer of a thousand soldiers).” In addition to the natural stronghold of Gokasegawa River to the north and the Osegawa River to the south, the castle was surrounded by a mort.

After the Takahashi clan, lords from four clans, Arima, Miura, Makino, and Naito ruled the castle alternately until the Meiji restoration. The Kita (northern) Ote-mon gate that was restored in 1993 was the entrance gate to the north of the castle, and is also the entrance way to the Ninomaru building.