On March 24, we held a regional revitalization workshop centered on agricultural lodgings. 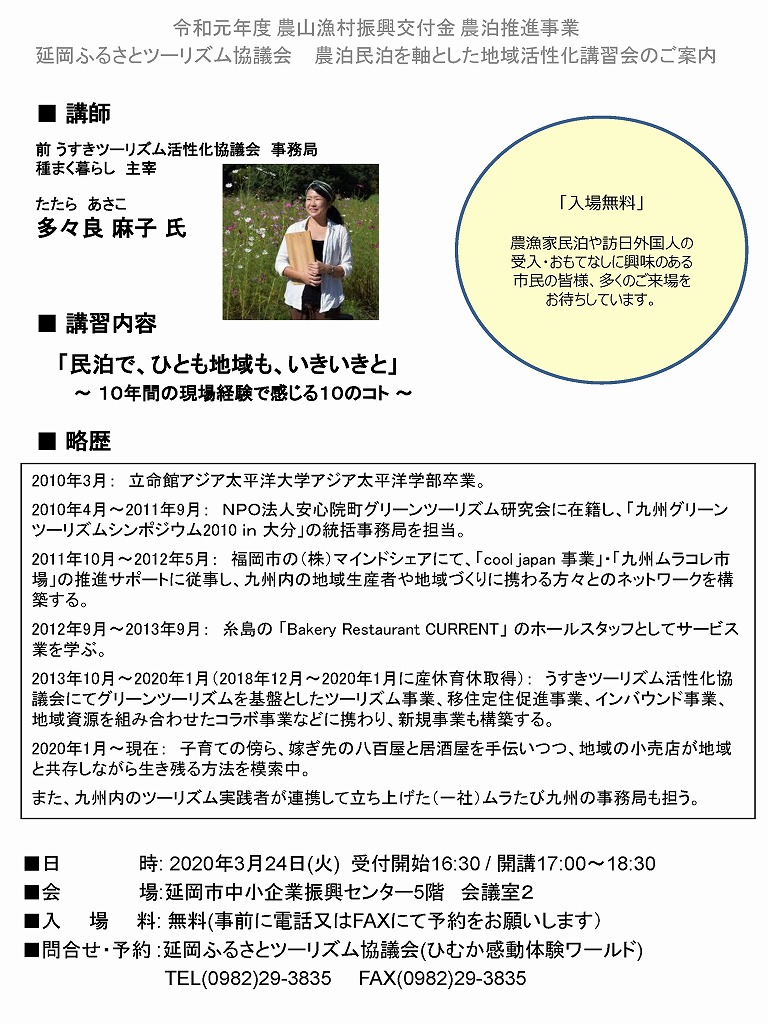 The Nobeoka Furusato Tourism Council (Chairman Shigenori Ando) will hold a “Regional Revitalization Workshop on Agricultural Night Accommodation” at the Small and Medium Enterprise Promotion Center in Higashimotokoji, Nobeoka City from 5:00 p.m. on March 24. Admission is free. We are looking for the participation of citizens who are interested in the accommodation of farmers, foreign visitors to Japan, and hospitality.

On the day of the event, Mrs. Asako Tatara, the former head of the Usuki Tourism Revitalization Council, who lives in Usuki City, Oita Prefecture, was invited as a lecturer, saying, “Ten things that people and regions feel in the field experience of 10 years of lively Lectures will be held under the title “Aoi”.

Those who wish to participate will be visited by the Nobeoka Furusato Tourism Council (in Hika Impression Experience World, by telephone /FAX 0982-29-3835). Detailed inquiries are also available.

From April 2010 to September 2011: He was a member of the Green Tourism Research Group in The Npo Reassurance Town, where he was in charge of the general secretariat of the Kyushu Green Tourism Symposium 2010 in Oita.

October 2011- May 2012: At Mindshare Co., Ltd. in Fukuoka City, we will be engaged in promotion support for the “cool japan business” and “Kyushu Murakore market” and build a network with local producers and people involved in regional development in Kyushu.

From October 2013 to January 2020 (take maternity leave from December 2018 to January 2020): Tourism business based on green tourism, immigration settlement promotion business, inbound business, He is involved in collaboration projects that combine local resources, and will also build new businesses.

January 2020: While raising children, while helping greengrocers and taverns where they marry, they are looking for ways to survive while local retailers coexist with the local community.

In addition, the secretariat of Kyushu is also responsible for the cooperation of tourism practitioners in Kyushu.

People who are interested in private lodging, all gather! ! Day trip experience meeting on March 14th and 15th

The revised version of the private night introduction video has been uploaded.

We were able to have the “Nobeon Satoyama cycling” Course!